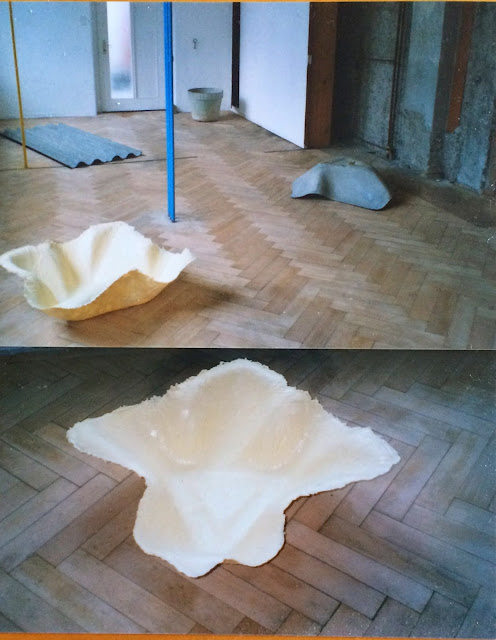 Eternit an industrial material with a highly ambivalent history was the central subject
of research prior to the solo show in Glarus. Eternit has been invented in 1900 by
Austrian Ludwig Hatschek and since been successfully spread all across the globe
as a fireproof building material using asbestos fibre. Since 1924 the factory in
Niederurnen has been operating under the name Eternit AG and already in the 1920s
its holding had expanded production in Europe as well as in Egypt and Greater Syria
(today Lebanon & Syria).

All the pieces exhibited in the exhibition space date back prior to 1994 when the
company in Niederurnen finally resumed to use asbestos in their production and
were collected in the area of Glarus. The material is locally not only present in roof,
tiling and facades but also in many gardens and front porches in the shape of flower
pots. One of the most prominent examples of combining the industrial material with
modern design is the flower pot called elefant ear by Swiss designer Willi Guhl from
1951 that was reproduced in white chocolate for the exhibition.
Once promising a revolution in the building industry the fatal consequences of
asbestos fibres only lead to an outbreak of cancer 30 years later, therefore the
highest mortality rate due to contact with Eternit materials is expected for the years
2013-17.