VISIT ME ONCE A YEAR / زوروني كل سنة مرة 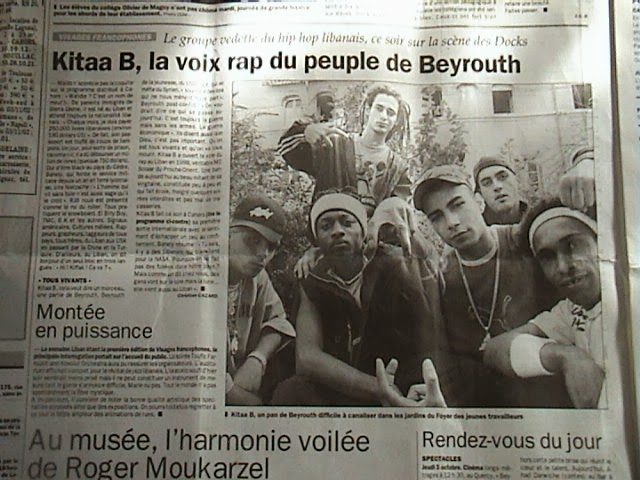 The hip-hop movement in Beirut started towards the end of the 90s. The members of the group « Kitaa Beirut » (Beirut’s Sector) were the first to rap in Lebanese Arabic and they were invited to represent Lebanon in a music festival, in France, in 2002. The six guys missed their flight back, disappeared and decided to stay illegally in Europe, leaving everything behind. Eight years later, I pay a visit to each member of the group, with my camera.

"Visit Me Once A Year - Mix Tape” is the portrait of six grown up men who by their difficult biographies reflect some of the repressions that Lebanon’s youth has been facing after the civil war. Shot between Paris, Lyon, Berlin and Beirut, the film traces the story of the group and addresses the problems that our generation is facing in terms of immigration, independence, privacy and culture. The film is a mix of old and recent footage that I have been accumulating since I first joined the group thirteen years ago.
Towards the end of the 90s, a few years after the end of the civil war, the hip-hop movement was born in Lebanon. The first trials of Arabic rap in Lebanese dialect appeared with a collective called « Kitaa Beirut ». The aim of the group was to introduce, to the new generation of the city, a new way of expression through hip-hop, lyricism and street life. In Beirut, we had always the connotation of the street guerrilla (militia), but we had never heard of street art culture at that time.
Life was getting hard on the group in Beirut. There were a lot of restrictions and problems with the police. They used to gather in a parking spot in the city, away from everyone, to rehearse and prepare for their concerts. This parking, known as “Rap King”, at that time, by the members of Kitaa Beirut, became their second house and their first studio. They would eat, drink, work and meet people, journalists, producers and friends there. Every one would join them to listen to their private and improvised sets of music.
One of the main members of the group, born in Beirut from African descendants, found himself from one day to another with no legal papers. The police arrested him and put him in jail. The rest of the group had constant problems for example escaping from the army and the civil service to record songs, work on music and meet the rest of the crew.
Waldo, Banelly, Billy, RGB, TMC and me were the official six members of Kitaa Beirut, and then joined new talents and fans to the crew. The group did its first music tour in Lebanon with the “Francophonie” festival and many concerts in Tripoli, Beirut, Jounieh and Jbeil. During the festival, they were given their first equipped studio in the area of Gemmayzeh where they produced their first track called “Bi Siret El Mussi’a“ (Speaking About Music) in 2001 , that was featured in La CD-thèque’s compilation called “Beirut Incognito”.
During the “Fête de la musique” event, in the summer of 2001, the stage of Kitaa Beirut held 9 lyricists performing on stage like a big family of rappers similar to the Wu Tang Clan. The youngest among them, at the time, was a 13 year old boy who used to hang out in their studio most of the time. The most important characteristic of the group was to always gather people; this is the reason why, wherever they were, there used to be a large circle of people around. At that time, Lebanon had introduced a law forbidding gatherings in the streets of Beirut. If you were more than three, you would get searched and even sometimes arrested. A lot of times, the group members had to run from the cops and then meet again somewhere else. Sometimes, they even divided the group to different small groups not to walk together. The life style of those youngsters was different; they were stylish and full of humor. They were trying to create something new, to use the city and the esthetics of the city in their everyday life.
After some time, in 2002, Kitaa Beirut was invited to represent Lebanon in a music festival, in France, with other Lebanese musicians such as “Soap kills”, "Ziad Sahhab" and many more. A couple of concerts in the south of France were organized for them. The six young talents were leaving the country for the first time in their lives.
The arrival to France was magic. A room was given to them for one week. Everything seemed good and pretty. The concerts went fine, especially in the bars of the town more than the main big concert that was mainly attended by the fellow musicians and crewmembers. The week in France was over; the date was set to come back. Arriving to the airport, the members of Kitaa Beirut disappeared. Instead of taking their flight back to Beirut, they took the bus, jumped into the first train towards Lyon and decided to stay illegally in Europe, leaving everything behind them, thinking that Europe is the top, the symbol of freedom and Human rights, the dream becoming true, France the hip-hop capital of Europe. Well, things did not go as good as expected and the six found themselves sleeping in a small cave, similar to a squat, living from nothing in the cold snowy winter. Since the late 90’s I have been documenting some of those moments on camera. I was the first one to come back to Beirut to resume my film studies. 9 years of absence later, I decide to pay the remaining members of Kitaa Beirut a visit with my camera, to every member separately, to try and learn the truth about what happened after I quit. What are their destinies, their motivations, their projects and if they ever think of returning to Beirut? The story explores other details from today’s Lebanese society. It talks about emigration, racism, army, music, the issues with the language and the use of the Lebanese Arabic dialect.